Some fact about Wesley Church:

Highlights of our history 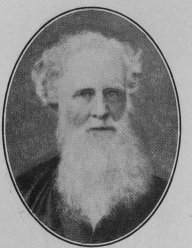 Henry Reed was a businessman and Methodist lay preacher in Tasmania. He visited Melbourne in 1835, soon after Batman and Fawkner arrived, and conducted the first worship service in the new colony.

Joseph Orton was a Wesleyan minister who had been imprisoned in Jamaica in 1828, 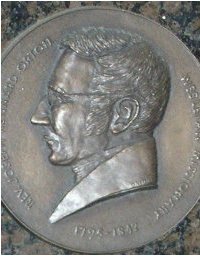 because he had strongly opposed slavery and offered education to African slaves.

He was District Chairperson in Van Diemen’s Land (Tasmania) 1836-40. He visited Melbourne in 1836, and on April 24, he conducted the first service by an ordained minister in the colony.

He stressed that aboriginal people must be treated justly, and that substantial land must be reserved for their use.

By 1838, there was a Wesleyan society of about 30 people, meeting in a small brick church

on the corner of Swanston Street & Flinders Lane. They were led by lay preachers, including:

George Lilley, an Irish settler who ran a small shop;

Thomas Watson, a Waterloo veteran who ran a water-carting business;

They soon outgrew the first chapel, and a second brick church, 47 ft x 57 ft, was built in 1841 on the corner of Collins Street & Queen Street.

The organ installed in 1842, is now in the present church. 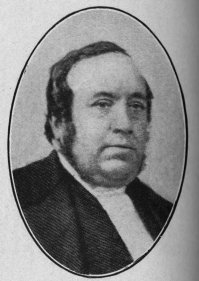 Daniel Draper was superintendent in Melbourne, 1855 – 1866. Under his leadership, the present large gothic church in Londsdale St was build, in spite of much opposition.
Draper died in January 1866, returning from Britain, the steamship “London”, was disabled in a storm in the Bay of Biscay. As the ship slowly sank over two days, he conducted a prayer meeting to enable people to prepare for death.

Wesley Church in Lonsdale Street was opened on August, 1858. Daniel Draper insisted on an elegant gothic design, which was contrary to Methodist practice at the time. The

architect was Joseph Reed, who also designed many notable buildings in Melbourne, including the Town Hall, the Public Library and the Exhibition Buildings, as well as Collins St Baptist Church, Scots Church and the Independent Church (now St Michael’s).

Moy Ling and the Gospel Hall

Moy Ling was a young Chinese interpreter converted to Christianity. With the support of Wesley Church he established a mission in Little Burke Street in 1872, and opened a Gospel Hall in 1872. That Congregation has now outgrown its building and worships in Wesley Church. Moy Ling was ordained by the Methodist Conference in 1877, and continued to minister for over 30 years.

Wesley Church was located near “Little Lon”, the poorest part of Melbourne. In 1884, the Home Mission Society appointed Mrs Varcoe as a Biblewoman to work with people suffering serious poverty. Along with Christian counselling, she would provide money for rent, food and clothing. She founded Livingstone House, a home for homeless boys in Drummond Street, Carlton. Sadly, we have been unable to find her first name.

By 1888, there were eight Biblewomen working in the inner city.

In 1893, with Melbourne’s worst slums crowding around the church, the Conference declared Wesley to be the Central Methodist Mission, and appointed Alexander Edgar as its first Superintendent. That Mission, now called Wesley Mission Melbourne, has grown into one of Melbourne’s largest non-profit social welfare agencies. It now offers community services in many parts of Melbourne, with headquarters on this site. 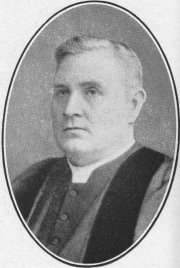 Alexander Edgar had been a strong advocate of both evangelism and social activism in all his placements. In 1893, he began the tradition of the “Pleasant Sunday afternoon”, where speakers would be invited on major public issues. His advocacy of fair wages led to him being appointed chair of the first Victorian wages board. In his time it was said that “services at Wesley were ritualistic in the morning, socialistic in the afternoon and evangelistic at night”. Alexander Edgar commonly held the evening services in the open air, or in a theatre. He commonly used magic lantern slides in these services. 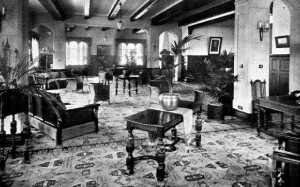 The Princess Mary Club was built in 1926 to provide accommodation in the city for young women who would otherwise be unable to receive tertiary education. This continued until about 1970.

The Uniting Church in Australia was formed in 1977, by union of the

• Robin Boyd (1988-95), who brought ecumenical experience of the church in North India and Ireland.

• Robert Gribben (1995-97), who emphasised the value of good liturgy conducted well, and

• Peter Gador-Whyte (1998-2001), who inspired the series of Stations of the Cross in the various churches of the city, to express the unity of the faith.

Separation of Mission and Congregation

Following a period of controversy, largely over plans to establish a primary care health facility for drug-dependant people on the site, Wesley Church and Wesley Mission were separated into two distinct bodies in 2001. 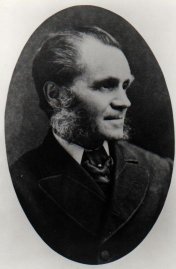 The Church was opened on 26 August 1858, having been built in nine months. It was designed by architect Joseph Reed, who also designed the Melbourne Town Hall and the Scots and Independent churches. It is in the English Gothic style and takes the shape of a cross. 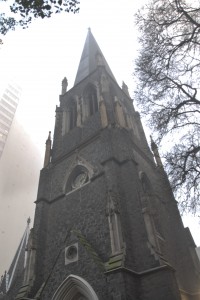 south, most of this being the nave. The width is 23.5 metres (77 feet) at the transepts (the “arms” of the cross). The original seating in the nave, transepts and upstairs gallery was for 1,800. Changes throughout the years have included the addition of a central aisle in the nave and the removal of some seats for a narthex at the entrance of the church. It now seats about 800.

The church has an octagonal spire rising 53.3 meters (175 feet) above ground level. It was for many years the tallest point on the Melbourne skyline.

Tour of the Church

The Narthex is dedicated to the Rev. Arthur W. Preston (d. 1985), sixth superintendent of Wesley Mission. Under his guidance, the Mission greatly expanded its social services. He also was a campaigner for world peace. The plaque near the entrance to the Hoban Chapel gives details. One the walls of the Narthex are two paintings by Rupert Bunny (1864-1947). “The Prodigal Son” (Luke 15:11-32) and “Abraham’s Sacrifice” (Genesis 22:1-14) were given to Wesley Church in 1934. The southwest porch is in memory of Dr. J.F. Wilkinson, a member of Wesley Church. A single window on the west wall shows St Luke, physician and author of the third gospel. 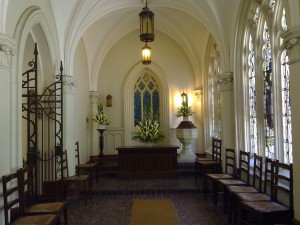 The Hoban Chapel was added to the church in 1933 in memory of the Rev. Samel J. Hoban, third superintendent of the Mission. The Communion table was given in his memory by his friends in Ballarat. Three windows commemorate aspects of his life.

The Gallery Windows. The largest windows are in the upstairs galleries. They are best seen from the lowest rows of seats in the galleries or from the opposite aisle of the nave or the transept.

In the southern gallery there are four large

windows. Two centre windows depict St Paul preaching in Athens to a group of eager listeners. The left window shows the good Samaritan helping the wounded man. The right window depicts Dorcas, an early Christian know for her good works. The lower panes of the window are a memorial to Rev. Alexander Edgar, the founding superintendent of the Central Methodist Mission. He was known for his preaching and for his action on behalf of those who were sick and poor.

The Organ was the first pipe organ in the colony. A generous and musical member of the earlier Collins Street Church ordered it and guaranteed the 500 pound purchase. It was built in Lancashire, England, and arrived in Melbourne in September 1842. A gala concert opened the organ in January 1843 and was attended by a large audience, including the colony’s superintendent, C.J. La Trobe. In 1858, the organ was moved to Wesley Church from the church at Collins and Queen Streets. Many changes were made in it, especially during the late 1800’s. In 1957, it was largely rebuilt and it was revoiced again in 1987. It became well known throughout Australia during the 44 years from 1924 to 1968 that services were broadcast weekly from Wesley Church.